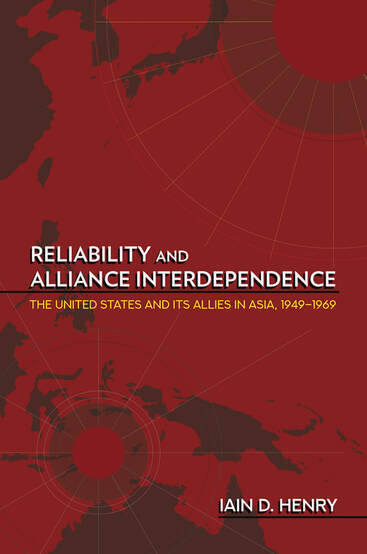 ​
​Reliability and Alliance Interdependence:
​The United States and Its Allies in Asia, 1949-1969

My first book, Reliability and Alliance Interdependence, proposes and tests a new theory of how alliance commitments are interdependent.  I argue that deterrence and alliance theorists, as well as scholars sceptical of reputation, have incorrectly focussed on the idea of a loyalty reputation.  Arguing against the conventional wisdom, I show that states do not always want their ally to display a character trait of unalloyed loyalty.

After outlining the theory, I test it against five case studies drawn from the first half of the Cold War in Asia. To inform my research, I conducted extensive archival research in the United States.  I collected thousands of documents from the National Archives and Records Administration (College Park, Maryland), the Dwight D. Eisenhower Presidential Library (Abilene, Kansas), the John F. Kennedy Presidential Library (Boston, Massachusetts), the Richard M. Nixon Presidential Library (Yorba Linda, California) and the Seeley G. Mudd Library (Princeton, New Jersey).  Thus, the book advances both our understanding of alliance politics, and also our knowledge of how the U.S. and its allies in Asia interacted during the first half of the Cold War.

I am thrilled that the book has been published in the Cornell Studies on Security Affairs series, which is home to so many outstanding books on alliance politics.  The Kindle version is free to download, or you can get a PDF copy here.  The availability of this open access e-book is thanks to generous support from the ANU's Strategic and Defence Studies Centre.  If you prefer a copy you can hold in your hands, you can order the book from Cornell University Press (use code 09BCARD for 30% off), from Combined Academic Publishers (use code CSFS2022 for 30% off), or at Amazon.

Praise for the book

"Hawks urge the United States to embark on—or stay in—costly wars, claiming that a US reputation for loyalty is essential for maintaining American alliances across the globe. In this terrific book, Iain D. Henry challenges this view, arguing that an ally's credibility depends largely on shared interests."
​- Jennifer Lind, Dartmouth College, author of Sorry States